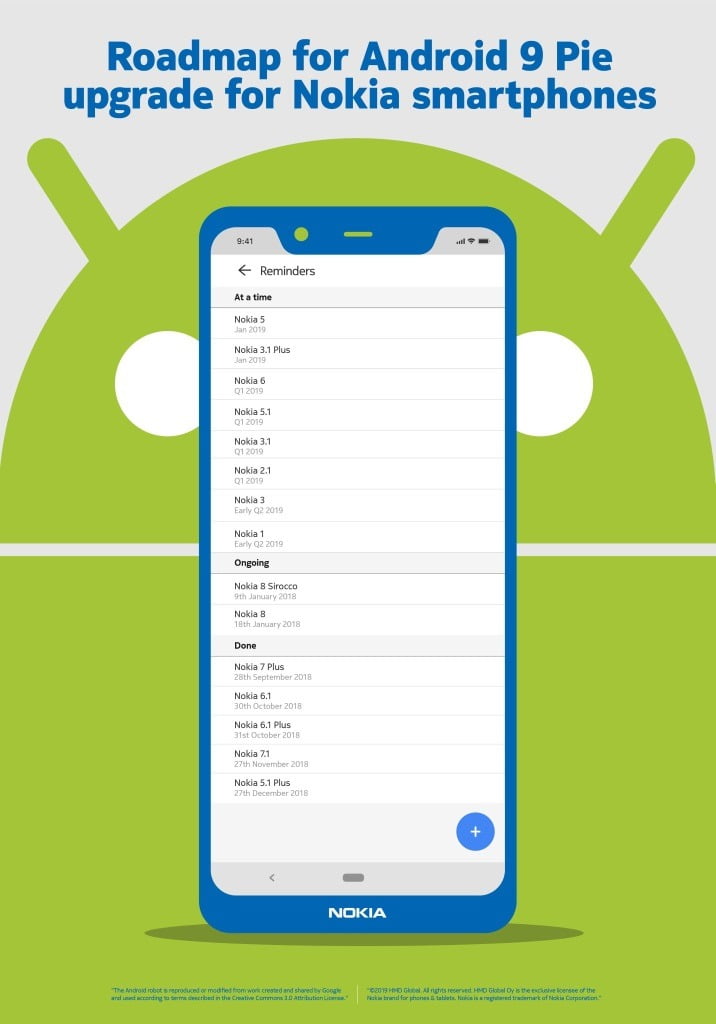 HMD Global commenced rolling out Android 9.0 (Pie) update for its Nokia smartphones beginning from Nokia 7 Plus back in September last year. It finished rolling out the update to Nokia 6.1, 6.1 Plus, 7.1, 5.1 Plus, Nokia 8 Sirocco and most recently, the Nokia 8. Earlier this morning, Juho Sarvikas, chief product officer at HMD Global has revealed the Android Pie update roadmap for older Nokia smartphones, it will begin this January.

Revealing our Android Pie update roadmap! We were the fastest in deploying Android Oreo 🍪 8.0 and 8.1 portfolio wide, with Android Pie 🥧 we are committed to be even faster. You can also take a peek into the kitchen here: https://t.co/NlWbss4q3P #nokiamobile #android #androidone pic.twitter.com/lrJADwJOxO

Older Nokia phones will start receiving Android 9 Pie beginning from Nokia 5 and 3.1 Plus later this week, Nokia 6 shortly after as soon it has Dolby implementation complete, and other devices will get the update throughout Q1 and early Q2 2019.

When Will Android 9 Pie Roll Out to my Nokia Phone? Nokia 5 and Nokia 3.1 Plus – January 2019 Nokia 6, Nokia 5.1, Nokia 3.1 and Nokia 2.1 – First Quarter of 2019 Nokia 3 and Nokia 1 – Early Second Quarter of 2019 Once the Android 9 Pie update is released for all these Nokia smartphones, users will be able to use features such as Adaptive Battery, Dark Mode, App Actions, App Timer, Adaptive Brightness, Accessibility Menu, Easier Text Selection, Gesture Navigation and more. At the same time, the Nokia 8 Sirocco was the most recent smartphone from HMD Global to get the Android 9.0 Pie update and since all Nokia smartphones are part of the Android One programme, users will also get software updates for the next two years and security updates for the next three years from the date of buying their smartphones.

Xiaomi Mobile is Back in Africa – To Challenge Infinix, Tecno and iTel Mobile

You Can Now Get Replacement of Your GTBank Debit Card Instantly