Samsung Devices That Have Received Android 11/One UI 3.0 Update So Far 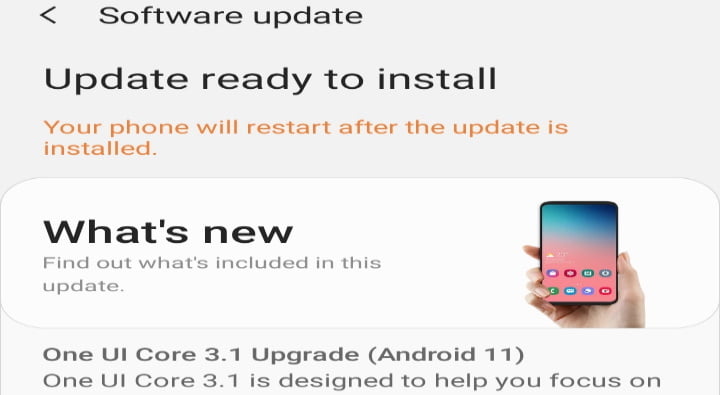 Android 11 is the eleventh major release and 18th version of Android, the mobile operating system developed by the Open Handset Alliance led by Google. It was released on September 8, 2020 and is the latest Android version to date.

It typically takes Android OEMs a reasonable piece to get the most recent version of the OS on more seasoned devices. However, Samsung has been improving and better at this consistently.

Beginning this year, Samsung presented the more current version of its custom software system – One UI 3.1. Just like the One UI 3.0, it is also based on the Android 11 operating system. Most of its 2020 phones now receiving the update. Here’s every device Samsung has updated to Android 11 so far.

Samsung’s Android 11 update brings the typical features you know and loves from Google’s update, including notification improvements, Bubbles for messages, and many others. One that was unfortunately cut, though, was Google’s useful power menu shortcuts for smart home devices. Shame.

On top of Android 11, the smartphone giant is also including One UI 3.0, which includes all of the features Galaxy owners have known and loved for years, as well as a few new additions and a fresh coat of paint on the design as a whole. It’s a slick look that continues to refine Samsung’s work on Android that, frankly, has especially become really good over the past few years.

So, what devices are getting Android 11? Samsung has confirmed updates for quite a lot of devices from the S, Note, Z, and A series, but even more devices will likely be updated over time. Here’s what’s been updated so far.

Samsung Devices that have Received Android 11

Rolling out as of December 2, the Galaxy S20, S20+, and S20 Ultra all picked up the Android 11 update on multiple US carriers as well as unlocked models and global carrier units. These phones also picked up One UI 3.1 in late February.

The Galaxy S20 FE picked up Android 11 starting in Russia on December 18, with the UK, India, and Germany also seeing updates. As of January 7, the update is rolling out in the US as well with all major carriers pushing updates as of January 18. At this point, it appears that the update has reached a nearly full rollout across the globe.

In late February, One UI 3.1 started rolling out to the S20 series, with the update broadly available in the US and around the world. Notably, though, the update is still not available for some devices in some regions.

Samsung has started the rollout of Android 11 to its Galaxy S10 series in January as well. The update is available in Switzerland on the Galaxy S10e and S10 5G at first but should expand to the S10 and S10+ as well as other regions in the near future. The S10e’s update is also available in the US.

The Galaxy S10 and S10+ are both getting their Android 11 update now as well, though the update was briefly pulled due to some bugs. As of February 1, the update appears to be widely rolling out in Korea and has been spotted on some US carriers recently. As of mid-February, the update has been released for all Galaxy S10 variants in the US.

The Galaxy S10 Lite picked up Android 11 around December 22 in India and Spain. The update has also since been spotted in the US, UK, and Germany.

One UI 3.1 started rolling out to the Galaxy S10 series in several regions around March 10th, rolling out widely in the US especially.

Around December 14, the Galaxy Note 20 and Note 20 Ultra saw updates to Android 11 on AT&T. Verizon, T-Mobile, and unlocked variants have followed in the time since. The update is also available globally on carriers and unlocked units.

In February, the Galaxy Note 20 series started picking up One UI 3.1, an update that’s now available on all major carriers as well as in other countries.

To close out 2020, Samsung rolled out Android 11 and One UI 3.0 to the Galaxy Note 10 and Note 10+. By mid-February, the update is widely available in most regions. The update also rolled out to the Note 10 Lite in early March.

Samsung’s uber-popular budget series of smartphones are also getting Android 11, and much sooner than most people expected. The Galaxy A51 5G and Galaxy A71 5G both saw updates arrive in early February in regional releases. Meanwhile, the world’s most popular Android phone, the Galaxy A51 (4G) saw its update rolling out in mid-February nearly across the globe. In early April, the Galaxy A51 5G finally got it’s Android 11 upgrade and Samsung went directly to One UI 3.1 as well. The older Galaxy A50 and A50s also picked up Android 11 with One UI 3.1 in early March, though only in some regions. It landed on the Verizon-sold A50 in April.

In May 2021, the Galaxy A02s saw it’s Android 11 update finally start rolling out in Russia ahead of other regions. Around the same time, the Galaxy A12 also saw its update in the same region. On May 13th, the update was spotted on the Galaxy A11 in Central America.

Samsung has traditionally been just a bit slow to update its foldable to new versions of Android, but the Galaxy Z Flip 5G broke that rule. That device’s update started rolling out in Switzerland on December 21 but has not been confirmed for other regions.

As reported by SamMobile on January 18, Samsung started rolling out Android 11 to its original Galaxy Fold. The update has already appeared in France, UAE, UK, and Switzerland, though it may depend on whether you own the LTE or 5G versions of the phone.

Other Samsung Devices with Android 11

The list of devices Samsung is updating to Android 11 goes beyond what we’ve listed above. Others that have been updated in at least some regions include:

Anyway, users of those Samsung devices in Nigeria or any other region can head over to Settings > Software update > Download and install to check whether their unit has got the update.