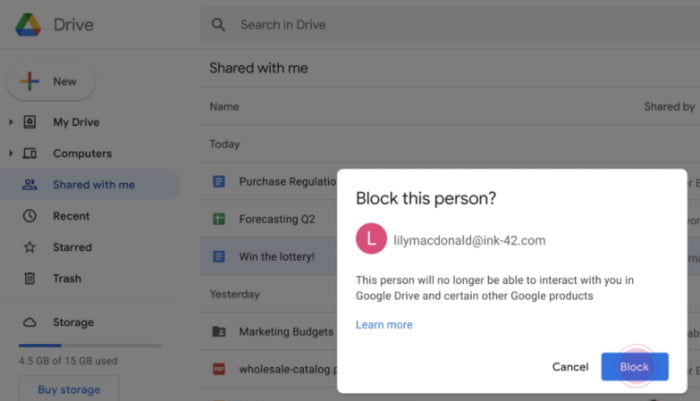 The internet, like anything else, has its highs and lows, such as cute kittens and spammers, trolls, and individuals who post nasty information. Many of us try to avoid these people, but certain platforms make it simpler than others. Here’s some good news: If you’re experiencing difficulty with these kinds of people, you can now ban them on Google Drive.

While Google Drive aims to let people store, share, and collaborate from anywhere, the product’s sharing capabilities can be abused by bad actors, according to a new Google Workspace update released this week. That’s why Google decided to make it possible for users to ban other users, even if they’d previously granted them access to their stuff.

“User banning will protect not just the usefulness of Drive sharing, but also the safety of Drive users,” Google stated in a blog post.

Furthermore, banning a user on the Drive will prevent them from engaging with you on other applications and services, according to Google.

Users may also prevent people from sharing anything with them in the future, which Google claims might be useful if another user “has a history of sending spam or abusive content.” Individuals will also be able to delete any existing files and folders shared by the offending user in their Drive, allowing them to eliminate all spam and abusive content at once. Finally, as previously indicated, the functionality would allow users to deny access to their material to others.

To block someone, go to Drive and right-click a file to bring up the Settings menu. Block (user) and then Block in the window from that menu. You may also unblock someone if you ever change your mind. 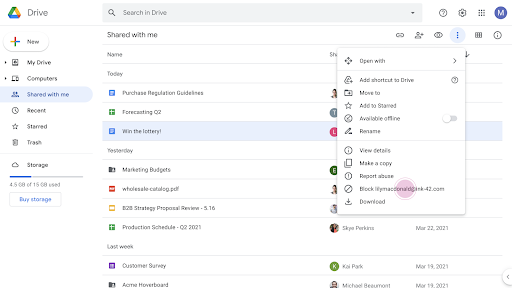 Spam on Google Drive has been an issue for years. This is because anyone on the platform may share files with anyone else as long as they have an email account. Sharing files do not require the other person’s consent. Although Drive has a “remove” option, this does not destroy the shared files; rather, it hides them from view, so they can still appear in search results and other places.

It may not appear to be a major issue at first look, but it can be extremely inconvenient or even hazardous. In recent years, one user expressed dissatisfaction with having access to a shared folder held by a violent ex-boyfriend, citing a “lack of control, the capacity to not be able to separate me from this content—from this person.” Indeed, it’s not a pleasant sensation.

On Thursday, Google said that the blocking function will be gradually rolled out to all Google Workplace customers, G Suite Basic customers, Business customers, and individuals with personal Google accounts. The functionality was first revealed in May this year.