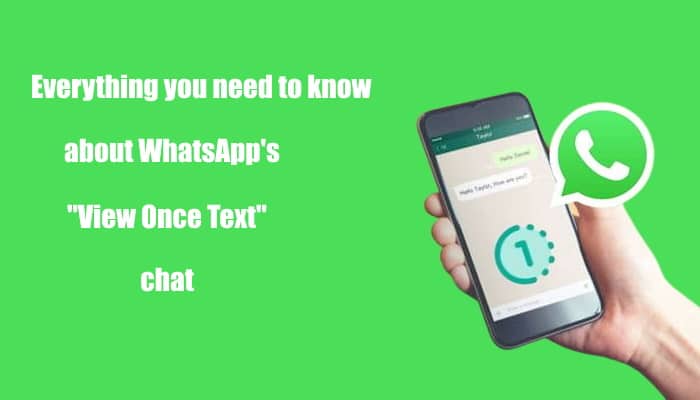 Whatsapp has enabled users to send “View Once” images and videos since last August, which disappear from the conversation once the receiver has viewed them.

The Meta-owned platform made the suggestion that “not everything we share needs to become a permanent digital record” in a blog post. The necessity for a feature like this, which immediately deletes from your smartphone after it has been opened, was caused by the fact that on many phones, capturing a photo simply means it will take up space in your camera roll for all time.

A few days back, the instant messaging service was rumored to be expanding the “View once” feature beyond merely photos and videos to text-based communications by WABetaInfo, a portal that offers real-time details about new WhatsApp features.

Users may soon be able to send text-based messages that can only be read once before they disappear entirely from the conversations, according to WABetaInfo, which claims to have spotted the feature in the most recent beta version of the Android app for WhatsApp.

It operates in the exact same way that “View once” photos or movies operate – there is no difference – and it is useful for sending sensitive information that you don’t want the receiver to have ongoing access to, such as password or credit card information.

Additionally, screenshots will be restricted, making it hard for receivers to save a copy of the conversation. For further privacy, it also deletes the messages from the recipient’s phone once they have been viewed.

Where is the Whatsapp View Once Text feature located?

A new unique button has reportedly been added next to the chat bar, according to WABetaInfo. A lock sign can be seen inside the send button (screenshot below) if you pay close attention. You must click that button to turn a message into a view-once text.

According to WABetaInfo, this suggests that users will begin to notice the new special button “in the upcoming release of the WhatsApp beta for Android.”

Please take note that the format of the view once the text bubble and the send button may change before the feature is released since it is still under development.

WhatsApp suggested that you update the app to the most recent version that is compatible with your smartphone in order to access the view once. You also need to be aware of the following:

The Convenient Way to Earn Passive Income Through Cryptocurrency Mining