Google Chrome will cease to work on Windows computers from next week: Here is Reason 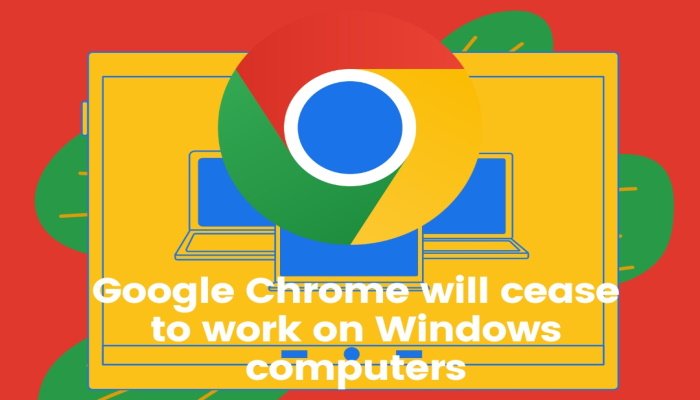 According to Google’s announcement, Chrome 109 will be the final version update that will continue to support Windows 7 and Windows 8/8.1.

On February 7, the tech giant will release Chrome 110, its newest version. But the update will only be accessible on computers running Windows 10 or later.

To continue getting future Chrome versions, you must make sure your device is running Windows 10 or later, according to Google.

There won’t be any new or further updates for those who are still using older systems, although previous Chrome-running devices will continue to work.

Google advised users of Windows 7 and Windows 8/8.1 to upgrade to a supported Windows version, so they could continue to get Chrome’s security updates and new features.

Google’s warning coincides with Microsoft’s decision to stop providing security updates and technical support for Windows 7 and Windows 8.1 as of January 10.

Updates for WebView2, the program that enables programmers to incorporate online material into their applications, will likewise halt starting on January 10.

The Edge web browser will no longer get security updates or bug fixes after January 10th, according to a previous announcement by Microsoft.

Earlier publications have advised about the security hazards associated with utilizing an out-of-date operating system and browser.

Similarly, Google is currently developing a new feature that will let users resume media playback while they are on the move across various devices. To improve users’ listening experiences, the new media playback update—which includes cross-device notifications—was created.

According to sources, the cross-device notifications would allow users to resume listening to media content, such as a playlist or a podcast, that they were listening to in their vehicle, phone, or TV later.

10 Great Alternatives to SaveFromNet for Downloading Online Videos for Free